Katie Taylor first heard about lymphoedema when her son, George, was diagnosed when he was four years old. Like many parents who hear those dreaded words while sitting in a doctor’s office, Katie didn’t know what the condition was, or what it meant for George.

Not long after George was diagnosed, Katie felt she wanted to do more to help children with lymphoedema. Although she’s always supported charities, she became pro-active with fundraising for the Leeds Lymphoedema Service which cares for children and young people from all over Yorkshire and parts of Lancashire and George was the very first child to be under its care.

Over the years, Katie has worked hard to raise awareness of the condition, as well as raising more than £80,000 by staging events, such as a masked ball and auction, special dinners, fun days and writing a cook book. Katie also staged an annual fun day for children, teenagers and young adults to get together with family and friends at Xscape, in Castleford.

This was such a positive and popular event, the idea was taken to a national level and the Children’s Lymphoedema Special Interest Group (CLSIG), together with Katie, developed The ‘Lymphaletics Fun Day’ which is now held every other year, in Sheffield, run by a great team of professionals from around the country. 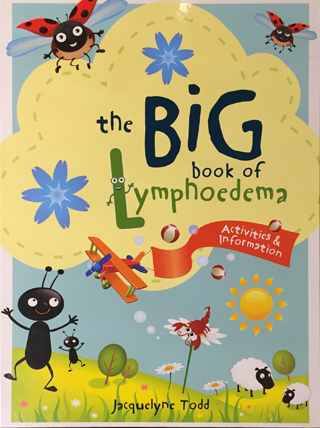 Much of the money Katie has raised has been used to produce an award-winning children’s book called The Big Book of Lymphoedema, which aims to help children and families understand the condition by presenting useful information in a colourful, eye-catching and child-friendly format.

Originally launched in April 2010, the book was written by Dr Jacquelyne Todd, who was a physiotherapist consultant in lymphoedema at The Leeds Teaching Hospitals NHS Trust, before she retired in 2013. Katie has now raised sufficient funds for a new 1,000 book print run and has re-launched The Big Book of Lymphoedema, with subtle updates.

The book won the Patient Information for Children award from the British Medical Association and has now been translated into several different languages, being the first of its kind to go out worldwide to hospitals.

The price of the book is £10 plus £4.80 postage & packing and can be obtained from Lymphshop.