Have You Got Cellulitis…or Red Legs?

Have You Got Cellulitis… or Red Legs?

This article is taken from the Spring 2014 issue of LymphLine, the LSN’s quarterly newsletter available to all LSN members. For details of how to become a member, click here.

Cellulitis is an acute, painful and potentially serious infection of the skin and subcutaneous tissue, most commonly caused by the bacteria, Staphylococcus aureus and Streptococcus (Wingfield, 2012). Cellulitis can affect any part of the body but evidence suggests the most common parts of the body affected by cellulitis are the lower limbs (Cox et al, 1998; Halpern et al, 2008).

It is well documented that cellulitis is common in those individuals with lymphoedema (Dupuy et al, 1999). The risk of cellulitis is increased in chronic oedema/lymphoedema due to the protein-rich lymphatic fluid serving as an excellent medium for growth of bacteria, and the pooling of the lymphatic fluid in the limbs with associated reduced lymphatic filtration (Baddour and Bisno, 1985; Mortimer and Levick, 2004). The relationship between cellulitis and lymphoedema is like a vicious circle, with each episode causing further damage to the lymphatic system, leading to increased swelling and thus an increased risk for further cellulitis (Firas and Cox, 2009). Mortimer et al (2006) agree, adding that once bacteria have gained entry to an area of swelling, it is very difficult to eradicate them.

The symptoms of cellulitis may include developing a temperature, fever, ‘flu-like’ symptoms, pain and redness which spreads. If you believe you may be suffering from cellulitis you should contact your GP or out of hours service for advice and treatment as soon as possible.

In those who are diagnosed with cellulitis there is often an untreated, underlying skin condition which highlights the importance of the role of self-management in early identification of conditions and prompt treatment to prevent cellulitis or the recurrence of cellulitis. For example, athlete’s foot, in between the toes or on the balls of the feet is extremely common and easily treated. This very itchy fungal infection causes the skin to peel and crack, which significantly increases the risk of infection (cellulitis). Athlete’s foot can be easily treated with over the counter remedies; ask your pharmacists for help and remember, if the symptoms do not go away, you must seek medical advice.

Chronic oedema/lymphoedema management has shown to reduce the incidence of cellulitis from 58% to 9% (CSP, 2012) so, good news, carrying out your daily skincare, exercises, massage and wearing your hosiery not only controls your swelling but is also serving to reduce your risk of infection.

The LSN and BLS have produced guidelines to manage cellulitis and recurrent cellulitis in patients with lymphoedema and these guidelines are available free to members from the LSN.

However, many people with lymphoedema and chronic oedema (swelling present for more than 3 months due to various causes e.g. after a stroke, related to immobility, or due to vein insufficiency) develop red legs and this is not due to cellulitis.

“Red Legs” can be defined as redness throughout both legs, usually below the knee only. There can be associated warmth and tenderness but generally individuals do not feel unwell.

The CREST guidelines 2005 for the MANAGEMENT OF CELLULITIS IN ADULTS is very clear in stating that bilateral (both legs) leg cellulitis is extremely rare! However, many patients are given antibiotics just because the legs are red, on the assumption that there is an underlying infection. This results in a number of patients whose condition does not respond to the antibiotics, possibly raising the question of antibiotic resistance and on occasion the non response to treatment can lead to unnecessary hospital admission.

The main differences between cellulitis and Red Legs can be seen below:

In many cases, the symptoms of ‘Red Legs’ can be attributed to gravitational eczema, infected dermatitis, tinea pedis (athlete’s foot) or other chronic conditions, which will not respond to antibiotics and are more skin related. 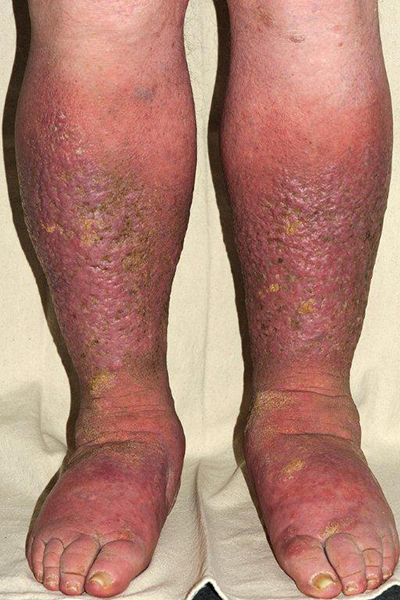 In many cases, the symptoms of ‘Red Legs’ can be attributed to gravitational eczema, infected dermatitis, tinea pedis (athlete’s foot) or other chronic conditions, which will not respond to antibiotics and are more skin related. 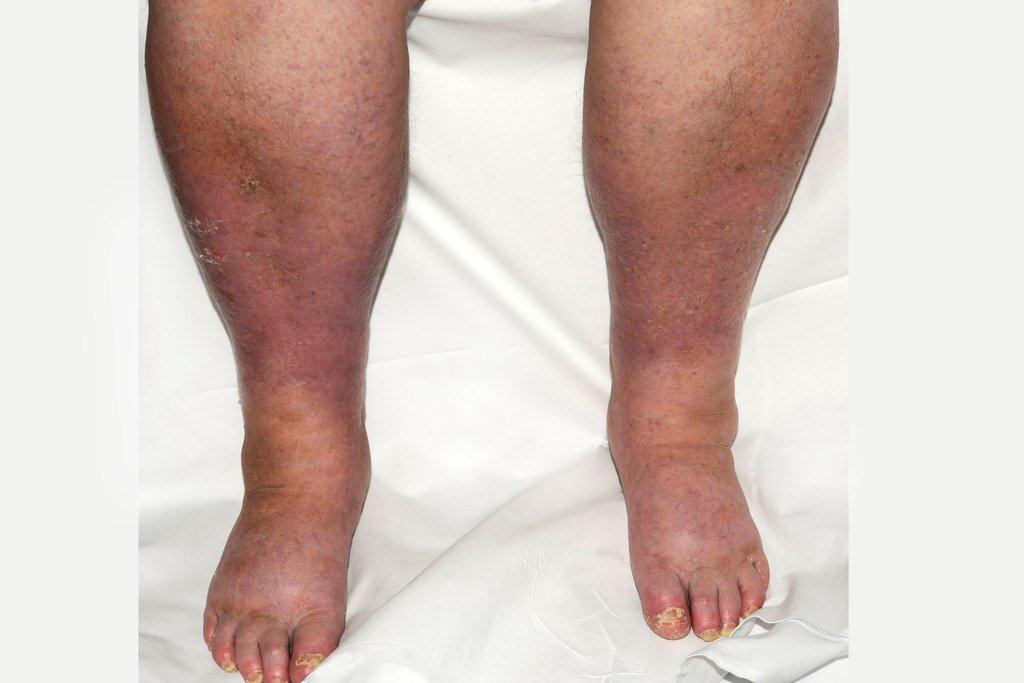 At the University Hospital of North Staffordshire (UHNS) a Red Legs service has been developed due to the high number of patients suffering from this debilitating condition. The aim was to raise awareness among healthcare professionals of appropriate treatment for patients with red legs, leading to improved patient experience and quality of life.

The initial step in setting up the new service was to identify the key stakeholders, this included those clinicians who would traditionally be responsible for treating patients with red legs, namely dermatology, tissue viability, podiatry, infectious diseases/microbiology and vascular departments.

At the University Hospital of North Staffordshire (UHNS) a Red Legs service has been developed due to the high number of patients suffering from this debilitating condition. The aim was to raise awareness among healthcare professionals of appropriate treatment for patients with red legs, leading to improved patient experience and quality of life.

The initial step in setting up the new service was to identify the key stakeholders, this included those clinicians who would traditionally be responsible for treating patients with red legs, namely dermatology, tissue viability, podiatry, infectious diseases/microbiology and vascular departments.

These clinicians were brought together with A & E medics and nurses (i.e. those encountering patients at the beginning of the journey), the Matron for the area, the directorate manager and patient representatives (selected from willing and interested members of the local lymphoedema support group). One patient was then invited to share their story, this proved to be extremely powerful in breaking down barriers and allowing the group to really focus on the task in hand.

Diagnostic and treatment pathways were developed with the relevant clinicians, along with patient representatives. These were to be used to assist in the differential diagnosis of each patient attending the new service with red legs and to develop the appropriate treatment plan.

The new service opened in July 2013 and referrals have mainly been received from emergency portals e.g. A & E, GPs and District Nurses.

It is important to know what you can do to treat your red legs in the absence of a Red Leg clinic. There are some easy self-care measures that can be employed to treat this disabling and embarrassing condition.

The treatment for red legs includes: skincare, exercise and compression, very much the same as in the management of swelling.

The legs and feet should be washed daily in a soap substitute e.g. aqueous cream or Dermol 500 e.g. Epaderm/Hydromol cream, and then dried thoroughly, paying particular attention between the toes. Observe for any cracking of the skin, peeling or white, wet skin in between the toes and/or on the sole of the foot as this may be tinea pedis (athlete’s foot) and will require prompt treatment with an anti-fungal preparation.

Once the legs are dry, the legs and feet can be moisturised again with an ointment e.g. Epaderm/Hydromol. An ointment is preferential over a cream as they contain less additives and therefore, cause less irritation, but they should be smoothed on, in the direction of hair growth and not rubbed in, to avoid folliculitis (infected hair follicles).

You should then wait 10-15 minutes for the moisturiser to soak in before applying a steroid ointment (only available on prescription). This should be applied sparingly to the affected areas and should be rubbed in until it has disappeared (you must then wash your hands). Initially, a potent steroid may be required e.g. Betnovate ointment 0.1% but in time this can be reduced to Betnovate RD or stopped if the symptoms are resolved.

It is imperative to keep as active as possible. If you are able, increase your walking each day but if your mobility is severely limited, do these exercises sitting down at least once a day:

‘Too often patients are given a course of anitbiotics for redness on the legs, when they otherwise, feel well and do not have a temperature / fever, just in case!

Following arterial assessment e.g. Doppler (which can be arranged via your GP or district nurse), compression should be applied in the form of stockings or bandages, depending on the amount of oedema (swelling) that may or may not be present.

When you are not exercising you should sit with your legs elevated preferably at or above heart level. This really means reclining on a sofa, bed or reclining chair. Whatever you do never fall asleep in a chair with your legs down!

If the redness does not improve it may be necessary to arrange a dermatology review, for patch testing, to check for any allergies/sensitivities to ingredients that are coming into contact with the skin.

Red Legs must be separated from cellulitis at all times. Too often patients are given a course of antibiotics for redness on the legs, when they otherwise, feel well and do not have a temperature/ fever, just in case! This over use of antibiotic therapy can be responsible for the development of antibiotic resistance. If you believe you are suffering from Red Legs, discuss this with your GP and try the simple steps for self-management to see if this will help.

Next article: The surgical management of limb lymphoedema