To Needle or Not to Needle… That Is the Question!

To Needle or Not to Needle… That Is the Question!

This article is taken from the Summer 2005 issue of LymphLine, the LSN’s quarterly newsletter available to all LSN members. For details of how to become a member, click here.

When Anita first asked me to write an article for the LSN about my particular interest in venous access and lymphoedema, I was thrilled, but after I’d put the phone receiver down, the realisation set in that I had a difficult task ahead.

Needles and Lymphoedema is often an emotive issue. I know the LSN have many queries about injections and I have attempted to answer many of the frequently asked questions. As you read on, my hope is that you will see how complex an issue this is and that the answers are not always straight forward.

So why have I been asked to talk about this issue?

I am a nurse whose main speciality has been cancer treatment and giving chemotherapy treatments for the cure or palliation of cancer patients. I love nursing and remain passionate about excellence in nursing practice and provision of the highest quality patient care. Over the years, I have gained a lot of experience in venous access in patients receiving cancer treatments. I have been putting needles into patients’ veins for many years and believe me, I have heard every nickname you can imagine! 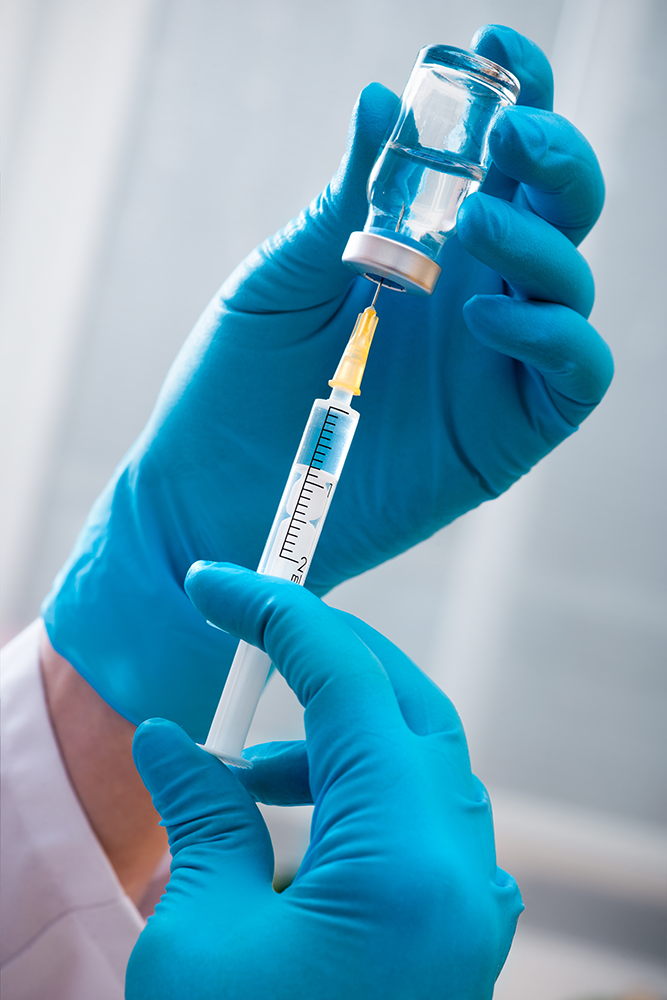 I first became interested in lymphoedema back in 1998 when I worked for the vascular access team at the Royal Marsden. The standard advice given to patients at the time of their breast surgery is to avoid having blood pressure measurements and injections on their “at risk of lymphoedema” arm. I was informed that the reason for this is that it may reduce the likelihood of swelling developing. For my BSc dissertation, I decided to conduct a systematic review of the evidence relating to the risk factors for lymphoedema development with a particular focus on the subject of needles and lymphoedema.

There is anecdotal evidence where patients have reported swelling developing after blood pressure recordings and injections, however, I found that there was little good research based evidence relating to this subject. I have been working within the field of lymphoedema for nearly 18 months now and am currently attempting to write guidelines for professionals on the subject of injections in patients at risk of lymphoedema, however, the process is taking longer than I expected, but I’m nearly there!

“At risk” versus those with existing lymphoedema

Some useful definitions and explanation of terms you may hear:

So why should injections be avoided?

At the time of breast surgery, patients should be advised to avoid having injections and blood pressure recordings taken in the affected side. This means blood tests, cannulae, BM tests and injections listed above. Theoretically, the affected limb is more at risk of developing infections within the arm because axillary nodes (the lymphatic nodes in the armpit) have an immunity function and if they are removed this immunity role is compromised. If a foreign object (that is a needle, for example) is placed in the arm, an immune response occurs and this puts the lymphatic system under more stress.

People who have lymphoedema are at an increased risk of cellulitis (an acute inflammatory episode). This is an infection of the tissues in the limb and may cause pain, the lymphoedema to worsen and may make you feel quite unwell. Injections should be avoided in someone who has swelling but sometimes injections into a swollen arm are necessary. Entry into veins in a swollen arm is more problematic because the swelling makes the veins harder to visualise and palpate. The risk of developing cellulitis is theoretically higher in someone with existing swelling.

Those at risk of developing lymphoedema but who have no swelling to the arm are still at an increased risk of developing an infection compared to someone who has not had the nodes removed. There have been reports that lymphoedema has been triggered by an injection in the arm where no associated cellulitis has been diagnosed. It often occurs immediately or within a period of a week or so.We are not sure why this occurs but it has been reported by patients we look after. Conversely, there have been reports of injections being given with no adverse effects and swelling never developing. “What is the percentage risk of getting lymphoedema if you put a needle into my affected arm?” is one of the most common questions I used to hear. I’ve made it one of my professional aims to find out the answer to this question but this is not as easy as it may seem.

All of this is anecdotal and until an audit or further research can be carried out, we will not be able to give patients statistical likelihoods. To be able to give patients a percentage risk can help direct future choices regarding venous access and help patients and staff make decisions on whether to use the arm that has had axillary node treatment. However, there are many factors which need considering, for example; is the likelihood increased in the older person, or is the incidence higher in someone who has had more nodes removed? Is hand dominance a factor relating to increased swelling? How do we ethically carry out this research?

So what should you do?

In the first instance, always offer your unaffected arm for injections of any type. Educating practitioners is not forbidden! Let staff conducting procedures involving needles know that it should be avoided so they can look into this in more detail. I have been attempting to spread the word by talking to district nurses and speaking at conferences. It is not uncommon for medical, nursing and phlebotomy staff to have never heard of lymphoedema, let alone know what it is and its implications on someone’s life. The purchase of a medic alert bracelet may be a useful tool to help people who are conducting these procedures know that use of the patient’s affected arm should be avoided.

Everyone has to learn somehow. Contrary to popular opinion, nurses generally don’t enjoy hurting people. Conducting such a procedure needs confidence and expertise. How do you become an expert if you don’t start somewhere? It is important that if practitioners are having problems accessing your veins for either a blood test or a cannula, you ask for an experienced member of staff to conduct the procedure. Our rule is to try twice and refer on, as after two attempts, both the patient and the practitioner are getting anxious and this will not help. Ensure that warming the limb has been tried before gaining venous access as this helps enormously. It is worth spending a few extra minutes warming the arm in order to achieve a successful result!

Patients who need repeated chemotherapy treatments may develop problems with their veins. The veins may become hard to find and the walls of the veins can become hardened and phlebitis may occur. This is when the wall of the vein can become inflamed causing discomfort and the vein may need to be avoided for further cannulation attempts. Some people are born with “bad veins”, often members of the same family have difficult veins. It isn’t that the veins aren’t there (otherwise the arm would not be a very good colour!) but it is that the veins may be deeper within the tissues and harder to access.

‘The purchase of a medic alert bracelet may be a useful tool to help people who are conducting these procedures know that use of the patient’s affected arm should be avoided.’

What happens when there are no suitable veins left in the unaffected side?

This is a common question. The most important thing to do in this situation is to discuss any problems with your medical team or your general practitioner. Until we have percentage risk figures then we have to look at the whole picture and each patient’s medical history.

Some questions to consider may be:

It is obviously vital, particularly in the case of cancer patients, that they receive suitable treatment for their disease. There may be a possibility of having a central venous access device placed, but these devices carry with them significant risks. The pro’s and con’s of having such a device placed will need to be weighed up.

What happens if both arms have had their associated axillary nodes affected?

If you only require the occasional blood test, then the feet may be able to be assessed for suitable veins. Venepuncture can sometimes be more painful in the top of the foot. By heating the foot and using anaesthetic creams, the procedure can be carried out more comfortably. Some phlebotomists (practitioners who are specifically trained to take blood) are instructed not to use the feet, especially in the general hospital setting. If this occurs, ask your breast care specialist nurse or your GP for advice on who to contact for a blood test should the need arise. Often, blood tests in the feet can be carried out by staff in the chemotherapy day unit. If no suitable veins are present in the foot then a choice needs to be made on which arm should be offered for such procedures. If longer term treatment and/or frequent blood tests are required, then further venous assessment may be necessary.

There are still a lot of questions as to why some people develop swelling and others do not. Unfortunately, we still have a lot to learn and medicine does not always have the answers we want. By medical and nursing staff working together with patients, we give the best advice we have at the time and give you the high quality care you deserve. By raising awareness in avoiding the use of the affected side, we can reduce the likelihood of swelling occurring. Prompt and early detection of potential problems means that decisions regarding someone’s venous access can be made earlier so that the most appropriate device is selected for the job!

Editor’s note: If you have had personal experience of having an injection in the arm and subsequently developed persistent arm swelling we would like to hear from you. Conversely, if you have had an injection of any type in the affected limb and not developed or exacerbated existing swelling, we would also like to hear from you. Your letters will increase our knowledge base in this area and help professionals and patients make informed decisions.